2002 kicked off in fine form with the first game of the Kisei Title Match being held in London. The match was played on 10/01/02 and 11/01/02 in the Montcalm Hotel, with the game relayed to a large group of go fans in the basement. Commentaries were provided by professionals Kudo and Kato, aided by Yuki Shigeno, and the television commentary was provided by Michael Redmond on his first Go visit to London. The match was between O Rissei and Ryu Shikun. O won the first game and went on to win the match 4-2. O and five other pros visit the Central London Go Club the next afternoon and the Sunday saw a special Yomiuri Shimbun Youth Championship at the Nippon Club attended by Michael and Yuki. During the event several BGA players were interviewed for Japanese television and also, in July, BBC television featured a news article about the popularity of the "Hikaru no Go" cartoons among children in Japan. 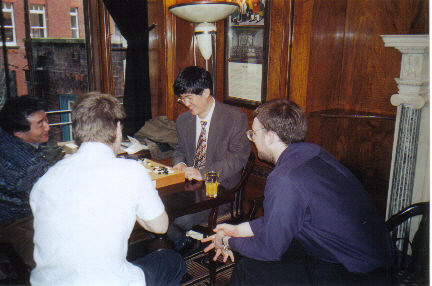 The British Go Congress returned to Scotland. Pollock Halls, Edinburgh, was the venue for a smaller than normal event. Winner was Piers Shepperson. Young Shawn Hearn won the British Lightning and Wanstead Club retained the Nippon Club Cup. Also Francis Roads held on to the Stacey Trophy for most wins during the year. The WKD trophy for the nidan losing most games in the year was retained by Alan Thornton ending the competition. At the BGA's Annual General Meeting, Tim Hunt became BGA Secretary, as Tony Atkins stepped down after 18 years to concentrate on the European Presidency. 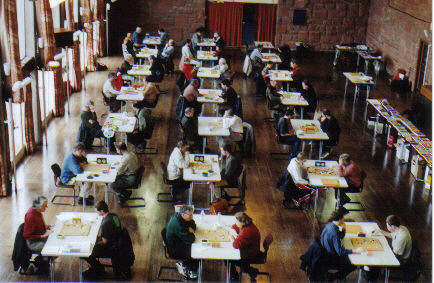 The regional events were mostly dominated by oriental residents. Before he returned to Korea in August, Kim Seong-June started 2002 with his third win in a row at the Hitachi Furze Platt (Maidenhead) and won at Cambridge, Bracknell and Epsom. His winning ways at Cambridge club was taken over by Yoon Jinhoon who won Wanstead, Wessex, Three Peaks and the National Small Board. Li Hiaou, a Chinese student from Liverpool, won the Northern. Oxford's Yang Min won at Milton Keynes and Nakamura Taiko won the West Surrey Handicap. Matthew Macfadyen won three events: the Jubilee Tournament in Birmingham, his tenth Welsh Open (48 unbeaten games) and Mind Sports Olympiad at Loughborough University. MSO Silver medal went to Alex Selby and Bronze to Mark Collinson, at this rather smaller scale event than previous. Des Cann won the Coventry (rapid play) and Alistair Wall held on to Cornwall (where the handicap event was won by Annie Hall). Tim Hunt forced out Simon Shiu by tie-break at Leicester, Ruud Stoelman won the Cheshire (where Ed Blockley won the handicap section) and Piers Shepperson won at Oxford. David Ward won the new event at Letchworth (new home of the Bexfields). Cambridge ran their own MSO weekend which featured the Challenger's League, the Barlow won by Ed Blockley, Hi-dans won by Jon Diamond and Juniors won by William Brooks. Young William also won the National Small Board Handicap section and a host of prizes in the Isle of Man. The new Scottish Barlow was won by Jim Cook. Cambridge won two London International Team events and Bracknell Drunk won the Thames Valley Team Tournament.

Jin Yoon at National Small Board

Matthew Macfadyen and Kirsty Healey held on to the British pair Go title winning the event again at Boars Hill in Oxfordshire. Runners up were Natasha Regan and Matthew Cocke, who were 4th in the European Pair Go in Cannes. British Handicap Pairs Champions were again Nicola Hurden and Shawn Hearn. Helen and Martin Harvey attended the World Pairs in Japan and were placed 28th. Pair Go was also played at the London Open, won by Oxford's Isoda Mihoko and Sugiyama Masashi, with Sue Paterson and Piers Shepperson runners up.

The top Go holiday of the year was the Isle of Man Go Week. Players gathered at the Falcon's Nest in Port Erin for a week of Go, but with time also to explore the beautiful island, enjoy the beach, make music or otherwise unwind. Tournament Winner was Piers Shepperson with David Ward the runner up. The Afternoon Tournament was won by Francis Roads (who also won 13x13) and players of all ages won prizes in this truly family event.

Winner of the Candidates' Tournament in Leamington Spa was Kim Seong-June. However in the Challenger's League at Cambridge he lost to Alex Rix and Matthew Cocke so never got to Challenge Matthew Macfadyen for the title. Winner of the League was Matthew Cocke who only lost to Des Cann. The title match games were played in Epsom, Milton Keynes and Wanstead, the middle game being commented live on the Internet by Guo Juan. Macfadyen won all three games giving him the title for the 6th time in a row, 18th time in total. Matthew Macfadyen played in the European Ing and Fujitsu Cups not doing so well as in some previous events. Matthew Cocke was however the UK representative at the World Amateur in Takayama, Japan, finishing 22nd. 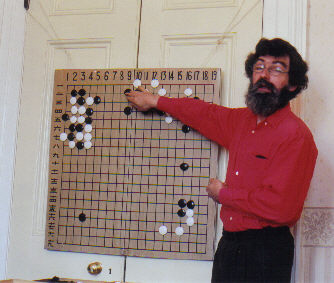 Jimmy Mao, shodan from Bristol, retained the British Youth title beating Tom Blockley into second. The event was held in March at Bloxham School, Oxfordshire. The other age category winners were Shawn Hearn, William Brooks, Paul Blockley and Ken Dackombe (under 8). Cambridge Chess and Go Club became the first non-School to win the Castledine Trophy. The later date was to avoid the Yomiuri Youth Championship, which was held after the Kisei game and was attended by professionals Michael Redmond and Yuki Shigeno. Jimmy Mao was the winner of this tournament as well. The Youth Grand Prix continued and was won by Jonathan Englefield (13 kyu) by a narrow 13 point margin from Paul Blockley (14 kyu), with the last game at the London Open making the difference.

The London Open ended the year. It was a major tournament of the Toyota-PandaNet European Go Tour and was again held in the prestigious, central location of the International Student House opposite Regents Park. 98 names appeared on a results list that was topped by Liverpool's Li Hiaou (6 dan) who was unbeaten. Second was Czechia's Vladimir Danek, third Marco Firnhaber from Germany and then T.Mark Hall, Oleg Mezhov (Russia) and Alex Rix. Best kyu player was Jonathan Englefield with 7/8. Young Chinese lad from London, Shen Li (4 dan) won the Lightning in a 16-stone final against Saber Khan. As well as the usual side events and a New Year dinner to entertain, game analysis and tuition was this year provided by Yuki Shigeno (pro 2-dan) making her first visit to the event.

2002 was a sad year as we lost a friend and opponent in May when John Rickard (4 dan Cambridge) died after a long fight with liver problems. In his memory and to raise money for the British Liver Trust, the BGA published the Puzzle and Quiz book containing many word and number puzzles that John had loved to solve.