2004 was a landmark year for youth Go in Britain. The new UK Go Challenge was played by 23 schools and over 400 kids. Dedicated Go teacher Peter Wendes taught several thousand more children during the year, supported by a growing number of volunteer teachers who also visited schools and the BGA was also present at several exhibitions and events, including ones at Bletchley Park, The Imperial War Museum and anime conventions. There were also teaching events for established players including two events in Guildford and a GoGoD seminar in Milton Keynes. The number of BGA tournaments increased; one of the new events was the first online event played on KGS. Though attendance at most events was down, attendance at the London Open was up and featured teaching by Professional Yuki Shigeno and live broadcast on IGS-Pandanet. The ever popular Isle of Man Go Week was successfully held, as were the MSOs in Manchester and Cambridge. The number of BGA members stayed at the 700 level. 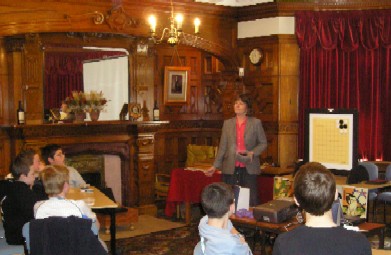 The British Go Congress headed to the Milton Keynes and was based on the Holiday Inn in the centre of the city. T.Mark Hall (4 dan), who lives in London, dominated the results tables winning the British Open for a second year running. The British Lightning was won on a tie-break by David M. King from Swindon. The Nippon Club Cup moved across London to be won by the Central London Go Club. Young Kim collected the Stacey Trophy for most wins during the year, narrowly beating Francis Roads by 1 point. At the BGA's Annual General Meeting a slightly amended team were appointed under President Simon Goss; Bill Streeten became the BGA Secretary.

The regional events were well shared around with only two players winning three events. Li Shen, a Chinese boy from London who is 5 dan and 13 years old, impressed all with his three wins: Furze Platt, Cambridge Trigantius and Epsom. Francis Roads was the other three-winner: Scottish, Isle of Man and the Wessex (after many tries). A visitor from Sweden, Carl-Johan Ragnarsson (3 dan), won the Northern (held as the MSO Championship) and also the MSO 13x13. Piers Shepperson won the MSO Lightning and Xiaoming Xie won the MSO Rapid. Other Chinese players won at Oxford (Wenhao Li) and Leicester (Zixin Wu). Korea's Young Kim won Wanstead and Jong-Ug Kim won the Cambridge Barlow. Matthew Macfadyen's only win was the Welsh (for the 12th time in a row). John Diamond won Bracknell again. Tony Goddard won the Three Peaks. Des Cann won Leamington again. Simon Shiu won at the new Durham Tournament. Andrew Jones won Letchworth. Alex Rix won Milton Keynes. Tony Atkins won the Isle of Man afternoon event. Cheshire was won by Andrew Morris and Cornwall by Toby Manning. Handicap events were won by Peter Fisher (West Surrey), Bill Streeten (Isle of Man), Ed Blockley (Cheshire) and Jonathan Englefield (Cornwall). The Scottish Barlow was won by Gordon Guo. The first KGS tournament was won by Stuart Barthropp. Team events were won in London by the Out of Towners and the Nippon Club, and in the Thames Valley by Swindon.

Matthew Macfadyen and Kirsty Healey held on to the British Pair Go title winning the event again at Boars Hill in Oxfordshire. Runners up were Natasha Regan and Matthew Cocke who also came fourth in the European Pair Go Championships in Romania. British Handicap Pairs Champions were this time mother and son Pauline and Steve Bailey. Jackie Chai and Francis Roads attended the World Amateur Pair Go Championships in Japan. 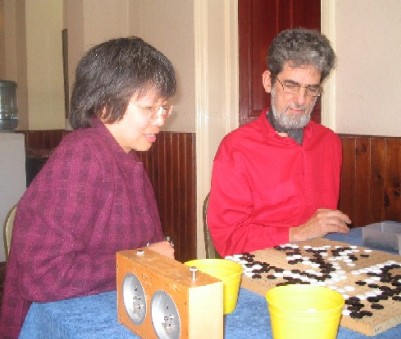 Jackie Chai and Francis Roads at the Pair Go Championships

20 players took part in the Candidates' Tournament in Leamington Spa. The top five moved forward to the Challenger's League held at the Cambridge MSO. The league was very close and ended in a three-way tie. In the play-off David Ward beat Matthew Cocke by half a point. Alex Rix was third. The title match games were played one in London and the two at the MSO in Manchester. All games were broadcast live on the Kiseido Go Server. David won the first game so a fourth game was necessary during the Wanstead Tournament. Defending Champion Matthew Macfadyen won this giving him the title for the 8th time in a row, 20th time in total. The BGA made him an Honorary Member as a consequence. David Ward did get a national title later in the year as he took the British Small Board Championship in Cambridge.

The Youth Championship moved to a new midlands venue of Aston and attracted 51 players, a recent record. William Brooks was the Youth Champion, also winning under-16. The other age group winners were Chao Gao, Paul Blockley, Costas Televantos and Ken Dackombe. The Castledine Trophy won by hosts King Edward VI (Aston) School. The Youth Grand Prix continued and was won by William Brooks, just ahead of Jonathan Englefield. The first UK Go Challenge was held at 23 schools and involved more than 400 kids. The finals in Manchester were won by William Brooks. Silver went to Hetty Boardman-Weston and Bronze to Matthew Hathrell. Other section winners were Costas Televantos and Duncan Bell. Top schools were Loughborough and Balgowan Primary. Of course star young player of the year was again Li Shen who concentrated on winning the adult titles, but also beat Matthew Macfadyen in a demonstration game at the Youth Championships. 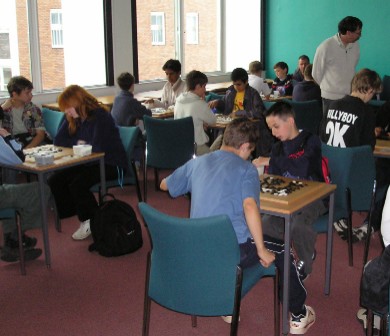 The London Open ended the year as usual. Again it was a major tournament of the TOYOTA - IGS-PandaNet European Go Tour and at the prestigious, central location of the International Student House opposite Regents Park. The number of players was up at 134. The player to watch was Pei Zhao (6 dan) from Germany and she won her first 7 games to take the title. However in the last round she lost to Jun Tarumi (3 dan) also from Germany, but he could not get a place as he only played (and won) 6 games. Second was Radek Nechanicky from Czechia and Christoph Gerlach (Germany) was third. UK's Tony Goddard did very well to take fourth place and Li Shen was joint fifth with France's Antoine Fenech. Christoph Gerlach won the Lightning, beating Hichem Aktouche from France in the final. For the first time the games were broadcast live on IGS-PandaNet. Japanese Professional Yuki Shigeno (2 dan) was on hand to educate with her popular commentaries. 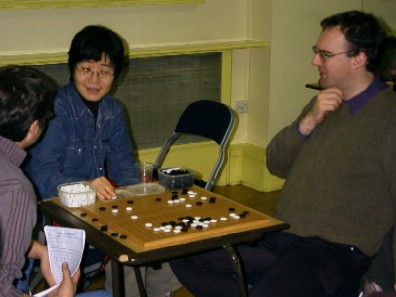 Yuki Shigeno comments on a game with Tim Hunt 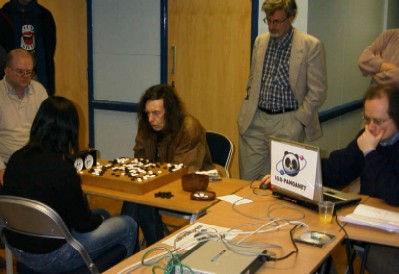