People have been making pilgrimages to the ancient city of Canterbury for over 800 years. In 1992 some 350 go fans from 28 countries trod the path of the pilgrims to Canterbury, for the British Go Association was hosting the 36th European Go Congress.

The congress was held at the University of Kent, high on a hill overlooking the city, which was a very pleasant location. Bed and breakfast student accommodation and self-catering houses were both available on campus at prices reasonable by British standards. It was only a short walk from the accommodation to the playing rooms in the Grimond Building and adjacent Drama Barn. The sun shone for virtually the whole fortnight and much opportunity was taken to play games outside or to relax on the grass. The sun also benefited those who enjoy the open air and elected to camp nearby and none of the usual British camping weather was seen. 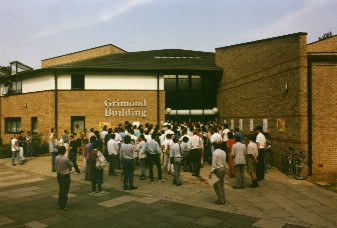 The sunshine made the day trip to Leeds Castle very enjoyable. Within hours of arrival on every picnic bench and under every shady tree go games were in progress. Never before has the ancient home of King Henry VIII resounded to the click of stones. Individually excursions were made into the beautiful Kent countryside, to the coast at Dover, Margate and Whitstable, to London and of course to Canterbury itself. An ancient city it made a pleasant break from the go to wander the old streets or to reflect in the peacefulness of the cathedral. Also there were chances to relax without leaving the congress site. There were two receptions, two barbecues, a recorder and crumhorn orchestra, the European Go Song Party and various side tournaments in games other than go. The Liar Dice tournament was won by Jan Ruten-Budde from Germany, with second Nick Webber (GB). Shogi champion was Arend Von Oosten, the Dutch former European Shogi Champion, with second Thomas Heshe (D). Various prizes were awarded to Mike Charles, Per Kristiensen, Viviene Maire, Jaap Blom, Andrew Grant and Alison Jones for skilful play at the card game called Pits or Struggling Upwards. In what was only the seventh ever international Mornington Crescent Tournament the prize of a bottle of vodka was awarded to the Finnish team for playing the most Helsinkis!

In an eleventh hour deal, sponsorship was obtained from Hitachi. Dr. Shirasuka Motoki and Mr. Nakayama Yasuo from Hitachi Europe both were able to attend the opening ceremony, Dr. Shirasuka bringing his young son along who is a very keen go player. We were pleased to have Dr. Shirasuka along again at the closing ceremony to present the enormous silver trophies to the winners. The British Go Association is very thankful to Hitachi for their help as it enabled all aspects of the congress to be developed to the full without incurring any financial worries. Thanks must go to the Asahi Shimbun newspaper, the International Amateur Pair Go Organising Committee, JAL and other minor sponsors for supporting various aspects of the congress. The opening ceremony was also graced by the presence of Nozaka Yasuo from the Japanese Embassy, and Wang Gui-Lin and Wang Xiao-Ning from the Chinese Embassy, his worship the Lord Mayor of Canterbury and the Lady Mayoress. 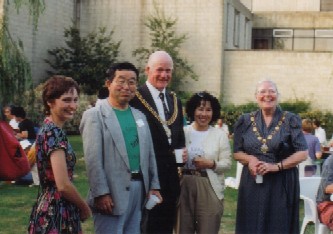 A goodly number of professionals attended the congress. Mr Shirae Haruhiko (7-dan) came with a tour party for a couple of days and whilst at the congress he played over 50 people in a simultaneous display, only helped by his daughter at the end. Miss Mito Yukari (1-dan) visited for one day and also from the Nihon Kiin came Nakayama Noriuki newly promoted to 6-dan. Mr Nakayama enthralled those at the congress with his wit and relaxed style at teaching the game through lectures, teaching games and analysis. He was even seen to play some shogi. Unfortunately he had to return to Japan before the closing ceremony so he missed the applause he deserved.

From the Kansai Kiin came a tour party lead by Mr. Shirakami Hisashi who brought with him professional player Mr. Inoue Shusaku (5-dan).

The congress was lucky in having no less than four Chinese pros, all 7-dan. Yuan Yun-Sheng had previously been touring Germany and was joined by Tan Yan-Wu, who is a friend of Zhang Shutai, Liang Wei-Tang and Miss Feng Yun from the Chinese Go Federation in Beijing. They all worked very hard during the congress on analysis and simultaneous games, and treated the organisers and friends to a garden party at the end. It turned out that Yuan used to be a chef so it was a successful party. The evening even included teaching Miss Feng to play cricket. 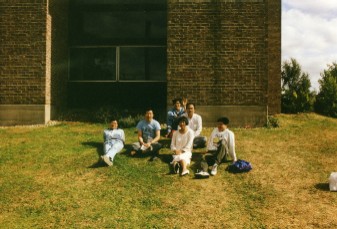 Other successful pro activities were the pro-pro match where Yuan beat Inoue, and the commentaries on the top games broadcast to a lecture theatre by video link.

We had no Koreans this year apart from a reporter, Mr. Lee, who was very pleased with what he saw and enjoyed very much the visit to the Lord Mayor which was organised for the professionals, being a mayor himself once. The Lord Mayor allowed Zhang Shutai to model the mayoral robes and British Go Association President, Alex Rix, proved himself capable of blowing the mayoral trumpet.

A go teacher of a different kind was Bruce Wilcox. The British and American Go Associations had held a lottery for an igo-dojo hand-held computer to raise money to fly Bruce over from Hawaii. This proved good value for money as his Instant Go lectures proved an instant success. His enthusiasm and charismatic style made learning go fun; it is recommended that he should be heard, if given the chance.

Bruce also took part in the European Computer Go Championships. However he was not so successful with Nemesis coming almost last. Michael Reiss, the computer competition organiser, proved to be the best (or luckiest) programmer as his program Go 4.3 won ahead of Alfred Knopfle's Modgo and Robert Rehm's Progo. Goliath and Star of Poland were not present so the competition was maybe not as hard as normal. 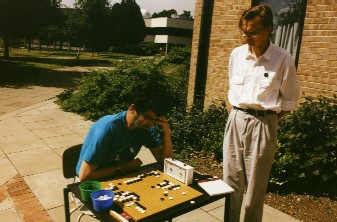 The congress was notable for the large number of side events organised on spare days and in the evenings. The Europe-Asia match was won by the West 14.5 to 6.5, maybe boosted by the presence of some from west of the Atlantic in the European team. A 9x9 board tournament was won by Jorn Horn of Germany and a 13x13 board event was won by Christoph Gerlach, also from Germany. A multinational team consisting of Matthew Cocke/Viviene Maire/Ger Hanssen won the rengo contest and Eindhoven Reunited (Frank Janssen, Rudi Verhagen, and Geert Groenen) won the Town Team Lightning proving the best of the 29 teams. Over another two evenings the individual lightning tournament was held ending up with Matsutomo from Japan beating Martin Muller from Austria. Frank Janssen (NL) won the play-off for third. Prizes for the self-paired handicap tournament went to J. Allen (GB) and M. Torikka (SF), and for lightning to K. Giedrojz (PL) and G. van Eeden (NL). Club attendance prizes went to Bremen and Manchester.

As usual the European Go Federation held its annual general meeting. Alan Held as president successfully chaired the meeting up until the point where the college porter threatened to turn the lights out and the meeting came to a hasty end. Business was finished two days later before a special constitution meeting. This too ran out of time but adjourned to the college common room where it continued until the early hours of the morning. 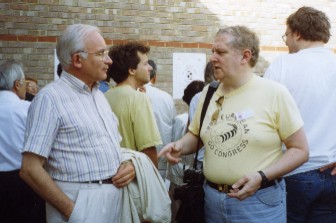 As usual the congress middle weekend was occupied by a five-round tournament. A large party of Japanese swelled the numbers as did the main organisers who were given a rest by a weekend crew taking over. Zhang Shutai, the 6-dan Chinese Ophthalmologist from London, won the tournament winning all his games. Second was the young Japanese student living in Paris, Miyakawa Wataru and third was veteran David Schoffel from Germany. Thanks to the sponsors generous prizes were awarded to all the 41 other prize winners. Of these, three won all 5 games: K. Hartman (3-kyu, D), T. Pfaff (3-kyu, D) and S. Backlund (4-kyu, S).

We were very pleased to have Mrs. Taki and Miss Sato from the International Amateur Pair Go Organising Committee join us for the second week. Miss Sato is a top amateur player and enjoyed a demonstration game against Alexei Lazarev, the European Champion 1991. The main reason for their presence was to support (very generously) the European Pair Go Championships. 32 male-female pairs battled it out over three rounds to determine 4 teams to play a knockout. Prizes were generous and included three pairs of vases flown in especially from Japan. The winners, because of the handicapping system, were the young and low-graded Carsten Kraus and Daniela Trinks from Germany. Second were Mark Hall and Frauke Kuhn, third Christoph Gerlach and Sabine Collin and fourth Andrew and Alison Jones.

During the first week there were a few upsets. Zhang lost a game to Giles van Eeden and Macfadyen lost to Lazarev and Eijkhout. Viktor Bogdanov lost too. Guo Juan was not present and so Lazarev shared the lead, unusually, with little known Dutch 4-dan Geert Groenen. Geert then earned notice by shaving all his hair off as a result of a bet over his first week's results. Van Eeden was leading the group on four wins and made the most of his good start as he ended up fifth overall.

Last year's dominant Japanese Mr. N. Kai only played for one week this time and so space was available for some other Japanese to do well. The honour for this went Mr. T. Matsutomo and Mr. W. Miyakawa. As the players went into the last round these two were on 8 and 7 wins respectively, Lazarev was on 8 and Frank Janssen was on 7 wins. 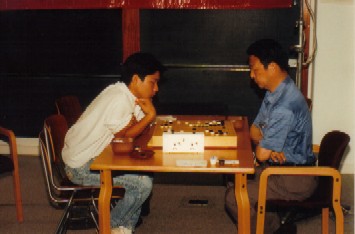 Surprisingly Lazarev lost to Egbert Rittner, Matsutomo lost to Zhang and Miyakawa beat Janssen, so that there were three players on 8 wins, none of them European. Now Zhang was on a lower CUSS tie-break score having lost his games early on, but the other two were tied. They remained tied for the purposes of the Grand Prix points, but it was decided that by having won their mutual game the 59 year old Japanese businessman Matsutomo should be the Hitachi European Open Champion. Alexei Lazarev, the Russian 6-dan, was the highest placed European and hence became the European Champion for the second year running.

Next placed were the Dutchmen van Eeden, Groenen, Janssen and Eijkhout; Rittner was ninth and Bogdanov tenth (all with 7 wins).

Of these Groenen and van Eeden get to play off for the place in the Korean tournament in 1993. Players with 8 wins lower down were G. Belmans (7-kyu, B) and R. Krajewski (7-kyu, D). All the dan players who won six or more were entered into a draw. The lucky ticket drawn by seven year old Titus Stacey was Ezio Burlini from Italy, who wins a trip by JAL to Japan.

Finally the congress was over and the organising team could pack up and go home for a rest. A measure of the success of the congress was the number of complements from people as they left. Harold Lee, Alex Rix, Alison Jones and Tony Atkins had all worked extremely hard along with the huge team of other organisers, but were unable to agree with the comments that it was the best run congress because of the heartache and panic that often set in, in the office. Anyway it was certainly the best European in Britain and on a par with the best in the rest of Europe and we all look forward to attending many successful congresses in the future. 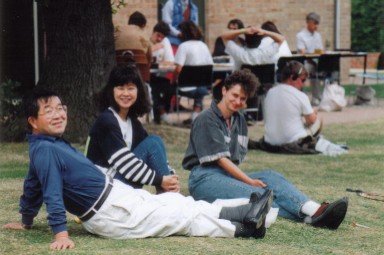