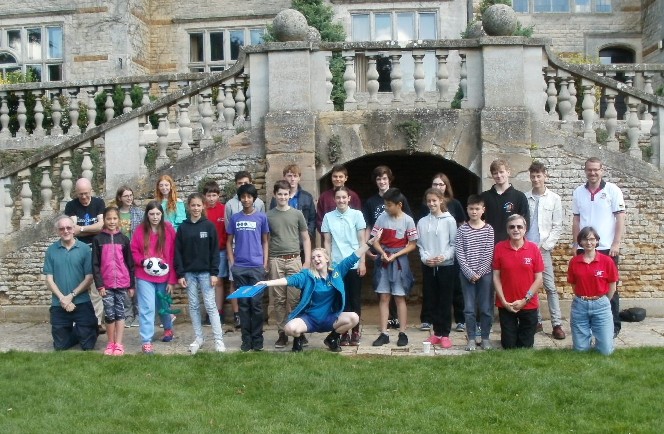 The first BGA Youth Residential Training was held at the PGL youth adventure centre at Caythorpe Court, not far from Grantham in Lincolnshire. The BGA group was made up of 19 youngsters aged 10 to 17 from Manchester, Letchworth, Cambridge and London areas, and five adults.

On arrival on Monday 14th August the youngsters were split into two by age for an afternoon of orienteering and raft building. Once dried out and fed, they assembled in the downstairs rooms of the Court for a short Go tournament, followed by Liar Dice and other games. Winner of the top group was Oscar Selby and Hilary Bexfield won both her games too.

On Tuesday the morning was spent with the youngsters split in to four groups by strength. Toby Manning, who commuted each day, taught the top group, Alison Bexfield and Roger Huyshe did sessions with the next two groups and Tony Atkins worked with the fourth. After studying on the theme of proverbs and an early lunch, the youngsters (and some of the adults) took part in wall-climbing and archery.

After dinner and teaching the group's PGL representative, Charlotte, to play Go, the evening saw a Pair Go tournament. The pairs winning both games were Alison and Yize, Hilary and Jacob, Joseph and Oscar.

On the final morning there was more teaching, with Andrew Russell helping too and Martin Harvey on hand where needed. After lunch there was a wrap-up session, featuring singing some proverbs and presentation of prizes and certificates, before the group said their goodbyes and left, both with happy memories and more Go knowledge.