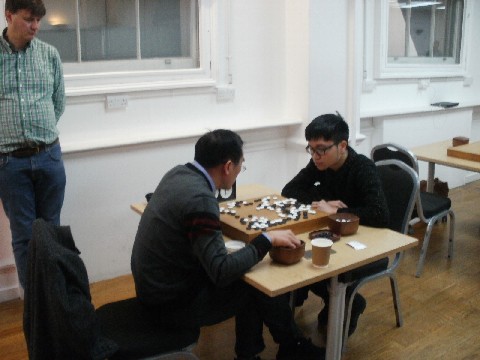 Of the 94 players from the UK and abroad that played in the 2017 London Open it was the large group of Chinese players currently living in the UK that dominated the event, but also there were two Belgian players in the top 5, Lucas Neirynck in third with 5 wins and Thomas Connor in fifth with 4 wins. The UK's top player, hence winning the David Ward Trophy, was Daniel Hu in fourth place with 4 wins also. In the end it was Weijin Chen who ended unbeaten with seven wins who took the trophy and top cash prize. Second place went to Ho Yeung Woo who only lost in round four to Chen. Chen is shown here in his last round game against Yousun Yang who took sixth. 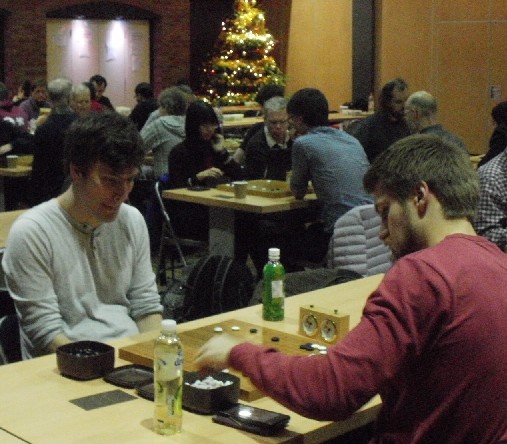 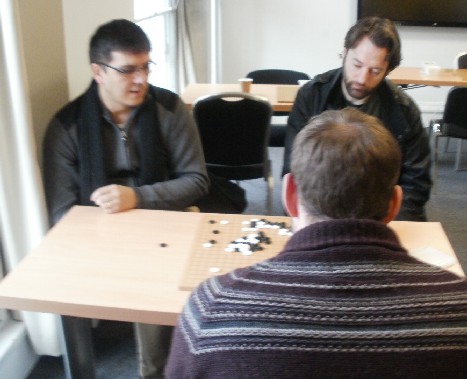 Catalin Taranu (5p) was again on hand to do professional game reviews and lectures and is shown here seated on the left reviewing a game.

On the second evening the London Pair Go was held with fourteen pairs taking part. After an exciting last round, the winners were Joanne Leung and Ho Yeung Woo. Beaten into second were Belgium's Marie Jemine and Lucas Neirynck. This latter two also did well in the Lightning the following evening. Thirty players played five rounds in four groups (plus a play-off in one group), followed by semi-finals and a final. Marie was one of the losing semi-finalists along with Peikei Xue and Lucas reached the final, where he was beaten by the event winner Yousun Yang.

After the prize-giving there was a small Rengo Tournament, before the Italian restaurant trip and New Year's Eve party. 12 teams competed and it ended in a draw between the Waffels and the Finns. Vincent Lochen, Juliette Brault, Thomas Connor and Lucas Neirynck (Waffels) and Juuso Koskinen and Olli Ervela (Finns) each took away an event teeshirt as their prize.

As usual the London Open was the last event in the Double-Digit Kyu Grand Prix and the Junior Grand Prix.