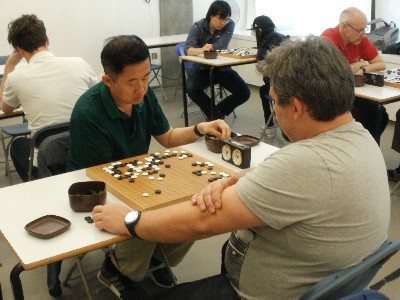 This year the Go events at the Mind Sports Olympiad (MSO), held again at JW3 in London, were at the start of the games festival rather than at the end. This meant lower attendance than the previous year, and the promised party of Chinese children under Sai Sun cancelled through terror worries.

On the opening Sunday of MSO, the MSO Open attracted 14 players from 5d to 8k to play a four round McMahon system event (bar at 3k). Winner of the gold medal and the top prize money was Gong Cheng (3d) who won all four, including beating the favourite Chang Han on time. Silver was shared by Lucretiu Calota (4d) and Chong Han (5d). Three of the below-bar players won two games, so no prize was needed lower down. Results

On the Monday afternoon 12 players entered the 9x9 event. As usual this contained some general games players, including a boy from Romania and the Italian inventor of VEGEtables game. Again the gold medal went to Gong Cheng with 4 wins and again the silver place was shared, this time by Joanne Leung (2d) and Matthew Hathrell (2k), both on 3 wins. Results

In the evening of the same day the 13x13 event saw six Go players playing at the other end of a room that contained Lowball Poker players. Again Gong Cheng proved he didn't have the worst hand by winning all four games to take his third gold medal of the week. Clear second was Alex Selby (2d) with three wins, and noteworthy was Roger Daniel (6k) in the bronze position with two wins, including one over Joanne Leung. Results

The MSO continues until 28th, with Go players playing other games and sometimes winning them too, such as Paul Smith and the Othello. MSO medal table