On the 28th December, dozens of people assembled in the capital for the London Open (the 46th), held this year for only the second time at the current London Go Centre. Despite the fact that more entrants were allowed this year (one hundred), there were a fair number of 'no-shows' which meant just 87 players actually took part. This was disappointing and unfair to the people on the waiting list who couldn't enter because the entry limit had been reached; organiser Gerry Gavigan will make sure that next year only those who have paid the full entry fee on booking will be guaranteed a place.

Sixteen countries fielded players with ages ranging 'from seven to seventy-seven'. The grades ranged from 7d to 16k; both stronger and weaker players were well represented with 28 dan players and 15 Double-digit kyus, six of whom were from Cheadle Hulme School (CHS). This year's professional was Catalin Taranu (5p) from Romania, and new British Champion Andrew Kay was also in attendance and reviewing games as he was not playing in the tournament.

Thirty-six players took part in the Pair-Go on Sunday evening, which is more than in previous years. Winners were Zeyu Qiu and Peikai Xue, who beat Marta and Davide Bernadis from Italy in the final. Results

The last round of the Open was on the Tuesday, New Year’s Eve, and two players caused excitement. One of these was unbeaten and, on winning the last round too, Sam Barnett (10k CHS) ended with a perfect seven wins. The other excitement was finding out if there could be a British winner of the event after a gap of 32 years. Having lost to Lukas Podpera (7d) in round three, Daniel Hu (4d) won his sixth game and placed first to achieve this feat. Coming second by two sos points was China’s Zeyu Qiu (5d). Third was Lucas Neirynck (5d France) who was rewarded by having his game against Daniel reviewed by Catalin before the prize ceremony. 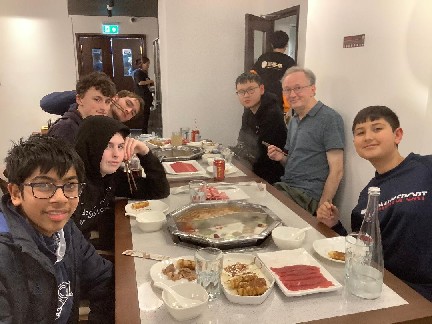 After the prizes there was a Rengo tournament, before a meal and then a New Year celebration at the Go Centre. There was general praise for the facilities and the atmosphere compared with the old venue (International Student House), because Go players had dedicated use of the building for the whole of the four days, which everyone enjoyed more. Moreover there are lots of interesting and cheap restaurants nearby, such as that where some of the CHS Team, with Yichun Zhao and Martin Harvey, are seen celebrating the seven wins of Sam (seated on the right).