The London Go Centre trustees took the view that the 47th London Open Go Congress would be staged as though the world were back to normal, writes organiser Gerry Gavigan. We thought this was important to help ensure the future health of the tournament. During the registration period it became clear that not everyone agreed with us.

Several nations were noticeable by their absence and the national levels of interest were down too. As the day approached there was slight up-tick in interest from overseas, but this was dashed by the news of the new covid variant and there were some cancellations from the UK.

Having said that, we got entries from the Netherlands and from Bulgaria. There were also some new kids on the block originating from HK including the winner of the David Ward cup, Alain Cheung (5d), who is only 12 years old. Proving that every cloud has a silver lining, we had a large contingent of Chinese students (mostly shown here with Gerry) unable to return home for the Christmas break, most of which were also 5 dan and accordingly dominated the tournament. 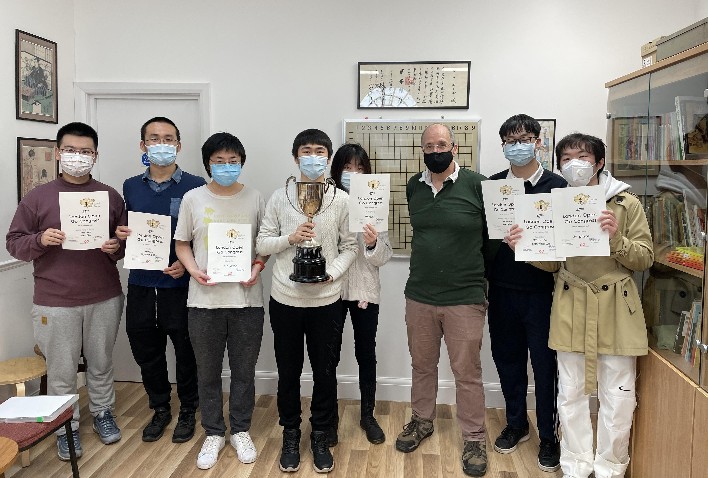 In the end we had 37 participants in the main tournament and another four for the side tournaments including one from Thailand - not bad all things considered.

Also because of covid restrictions Mateusz Surma (2p) was unable to attend, so we arranged for him to review all the top board games on LGC's Twitch channel, edited versions of which appear on our YouTube channel. This was made possible by our live streaming the top board.

The mix and low number of entrants meant that the still rising star and British Youth Go Champion, Scott Cobbold (aged 15) had a bit of a tough time of it, being drawn against two 5d opponents, otherwise winning all of his other games. As a consequence he finished second below the bar, pipped by new girl Alvina Kwok (12 years old, also on five wins) who ended up playing the eventual London Open Champion, Yaoling Yang, in the final round.

Another junior, Caleb Monk (8k), won all his games, and various prizes were given for other good results. For instance, Oxford City Go club sponsored two prizes for best U18 and best U12, won by Claire Chen and Andrew Volovich respectively.

The Lightning was won by Jun Su; the Doubles Rengo tournament by Yaoling Yang and Jun Su.

We also experimented with a continuous 13x13 tournament running in the background and this was won by LGC new boy John Eacott.

The tournament is financially supported by Nippon Club UK, GoMagic and Polgote sponsored the tournament with gift certificates, and they are all thanked for making for their contribution.