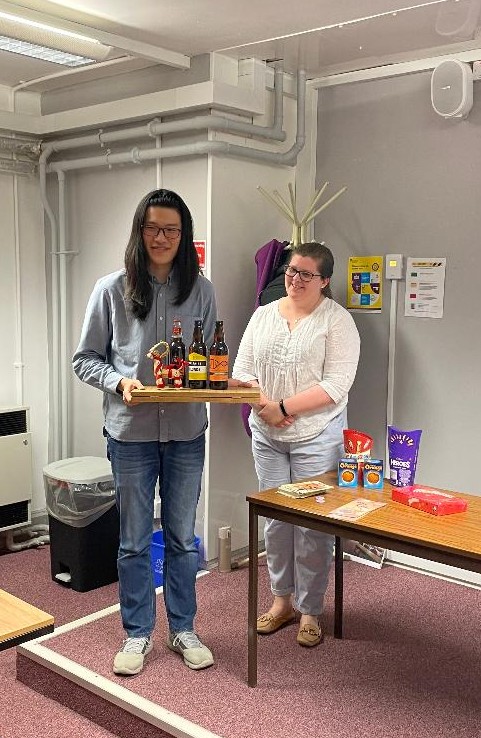 We held the first physical tournament in Durham since 2019 on 11-12th June. Nearly 30 people came with a whole range of ranks from some strong dan players to DDKs. While several players were from the North East, the majority had travelled from all corners of England and Scotland to attend. It was good to see so many familiar faces after an interval of two years for Covid.

As in previous years, the tournament was held in some rooms next door to the Oriental Museum and several players enjoyed having a wander round the museum between games to see the goban and other exhibits.

Unfortunately Andrew Ambrose-Thurman was isolating at home with Covid during the tournament and so was not able to run it. Luckily Dan Milne and Helen Harvey stepped up to help Alice run the tournament, which was much appreciated.

The winner of the Go tournament was Guodong Cao (4d, Oxford University Go Club) who won the coveted Goat Ornament with 5 wins out of 6, shown here receiving prizes from Alice. Prizes were also awarded to Zheng Wang (5d, no club), Leonardo Forchini (6k), and Nicholas Yelland (8k, Durham) who all won 5 games out of 6. Dan Milne (4k Durham) won the small board and lightning side tournaments. Results

On the Friday evening several players enjoyed an evening of Go and conversation in the Old Elm Tree pub in Durham city centre. About 20 people took part in the Go BBQ at Alice and Andrew's in a village just outside Durham. While it had been rainy and windy earlier in the week, by the time Saturday evening rolled round the weather was fine. Andrew had to wave sadly out the window at everyone from his isolation, but plenty of sausages were delivered to him. The BBQ included several Ukrainian dishes prepared by Alice and Andrew's Ukrainian guests. Everyone enjoyed trying these dishes and meeting the Ukrainian guests, who have just started learning Go and have been enjoying playing weekly in the pub.