Stephanie Yin 1p at Not the London Open 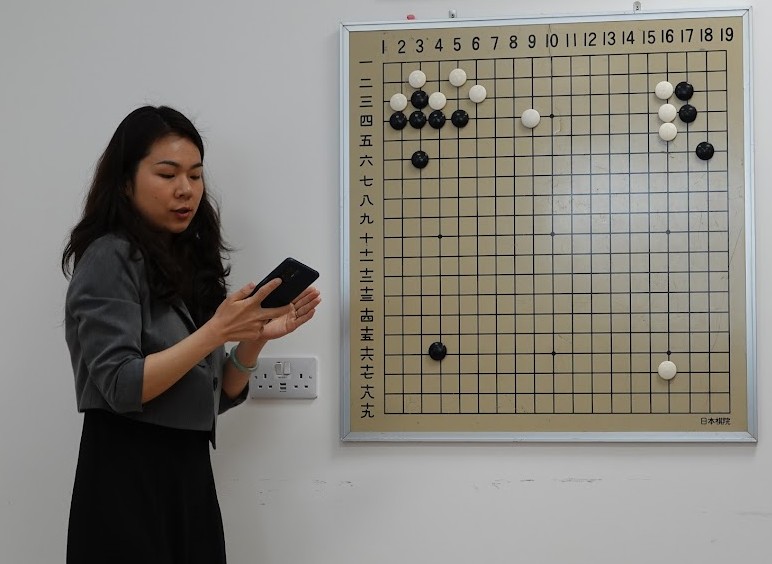 Not The London Open ran for the third time over the early May Bank Holiday weekend at the London Go Centre. The professional-in-residence was Stephanie Yin from the New York Institute of Go, shown right, informally assisted by Mateusz Surma.

57 people entered, ranging from 7 dan to 20 kyu, with some interesting skirmishes anticipated, especially above the bar. And the organisers were not disappointed. With Yaoling Yang (5d) falling to Zeyu Qiu (5d); Zeyu falling to Lukas Podpera, (7p) and Lukas falling to Yaoling, it was looking like the tournament would be decided by scissors, paper, stone until Bruno Poltronieri (4d) defeated Lukas by 1.5 points in the final round. Lukas commented afterwards, when he had recovered, that this was absolutely all about Bruno. So the order 1-2-3 was Yaoling, Zeyu, Lukas. All the top board games were live streamed.

Claire also deserves a mention for defeating Yaoling in the double-elimination lightning tournament (only Yaoling's second defeat in UK tournament play) , but Yaoling coped with a 21-stone handicap to beat Vlad Brebaneau and beat Bouyan Li twice to give him first place. Stephanie’s review of the Zeyu/Yaoling game is already on the LGC YouTube channel. Mateusz will be reviewing all of the top board games, the 21-stone game was captured on video so we hope to add that to the reviews and Stephanie’s Sunday night lecture too.