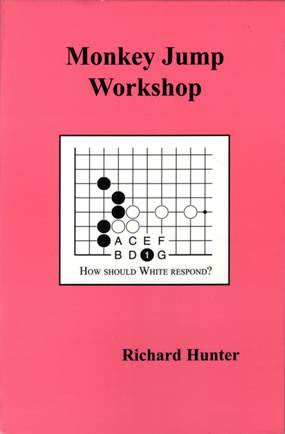 For a beginner to the game of go, the first encounter with a monkey jump is an intimidating and frustrating experience. In an instant, once promising territories vanish into thin air and three-eyed groups become corpses. Most players learn to deal with the monkey jump by trial-and-error, but all too often they obtain only passing familiarity. For those looking for true mastery of the technique, a big step forward comes with Richard Hunter's “Monkey Jump Workshop.”

Sensibly enough, the Monkey Jump Workshop begins with the monkey jump at its simplest: a basic reduction against a solid territory. The standard counter-moves are analysed before moving on to explore how things change when the surrounding position is altered. Even subtle differences can be important, and this chapter illustrates that admirably. All of the important considerations are presented with elegant examples without getting bogged down by details. Coverage continues with the monkey jump in the context of life-and-death situations and finally ends with a presentation of several professional games in which the monkey jump appears. Distributed throughout is an impressive collection of monkey-jump problems, both of the yose and life-and-death variety.

If all this seems like a lot of material to cover in a single book, it is, and the coverage is somewhat uneven. I was particularly impressed by the treatment of the monkey jump as an endgame move, while the chapter on the monkey jump in professional play is presented as a series of uncommented game diagrams that feels like filler material. Part of the difficulty seems due to the origins of the book—the chapters began as a series of stand-alone articles in the British Go Journal, and as a consequence are generally well organized individually but do not flow together and mesh poorly with the supplementary material added later. This also limits the book's value as a reference text, which is unfortunate given both the quantity and quality of material contained.

Although it needs a good editing job, the Monkey Jump Workshop is a worthwhile addition to the go collection of a kyu-level player. The book is by far the most comprehensive treatment of the topic available in English and contains all the information necessary to become a master of the technique.

The Monkey Jump Workshop is available from Slate and Shell Publishing www.slateandshell.com