This is the second volume in the Nihon Ki-in’s Small Encyclopedia series, published by Yutopian. As befits an encyclopaedia, it lists all the common fuseki patterns under thirteen categories – nirensei, sanrensei, Chinese, Shusaku etc., and gives the most popular lines of play for each, with examples from professional games.

As such it fills a gap in the Go literature between a general book on opening strategy such as In the Beginning and an in-depth study of one particular pattern such as The Chinese Opening or The Power of the Star-point. The nearest thing to this book that has existed in the past is the two-volume Modern Joseki and Fuseki, but that’s rather dated, extremely heavy going and out of print now anyway. 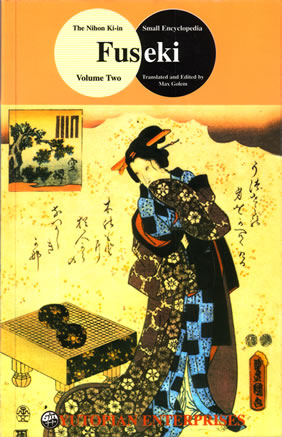 Professionals always say the fuseki is the most difficult part of the game, but for many amateurs it is effectively the easiest part, as they have little or no knowledge of how to play in the opening and therefore can’t think constructively about it. We’ve all seen players who rush through the first dozen moves then slow down when the fighting starts. This book is aimed at just such people in the middle to strong kyu range, though dan players will benefit from it as well.

One nice thing about the book is that it avoids getting bogged down in endless joseki variations. It is impossible to study fuseki in isolation from joseki but relatively few joseki are presented here, and those are for the most part simple lines that anyone who wants to be a strong player should know. All the joseki are presented on full board diagrams, in the context of a particular fuseki in which it is appropriate. Admittedly the large avalanche joseki is given, and that isn’t simple by any means, but it is essential knowledge when playing the nirensei pattern, and even here only two variations are listed. Considering that whole books have been written on the avalanche joseki, that shows admirable restraint.

You can read this book without a board as there are relatively few moves per diagram, though as always it is best to play the moves out on a board if you have one handy. As with joseki books, it should be studied for the ideas and concepts it contains, rather than necessarily learnt by heart. Feel free to experiment – the final chapter on ‘Unusual Openings’ should serve as a reminder that professionals are always trying out new ideas in their games. A book like this should be a guide, not a strait-jacket.

Some of Yutopian’s earlier books suffered from rather stilted English, but this has now been addressed and the text is as readable as any other Go book on the market. The fly-leaf lists a team of no fewer than eight proofreaders, though despite this a handful of minor typos have slipped through the net, mainly misspellings of the names of Japanese professionals. Probably the most glaring mistake is Hasegawa Sunao on page 225 changing sex to become Hasegawa Kayoko in the index.

All in all, this is a worthwhile addition to any aspiring player’s bookshelf.

The Fuseki Small Encyclopedia is translated and edited by Max Golem and published by Yutopian Enterprises (Y27).