Expert level Go is not that easy to explain. One of the main attractions is, though, simple enough to put across: the safe looking plays are dangerous, more often than most people expect. Dangerous looking plays can be much safer, in the sense that you lose more stones, but win more games. The point for the expert is that losing stones in certain deliberate ways can help the cause. So much for the theory. The practice is somewhat harder to grasp. 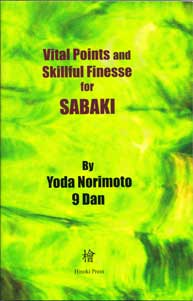 The new book ”Vital Points and Skillful Finesse for Sabaki”, from Hinoki Press, may prove a help to the aspiring player. Sabaki itself is the central elusive concept, meaning handling yourself well, when the usual instruments (the plays one learns early on as ’standard’) are too blunt. Memorably defined once as ’fancy footwork’, sabaki is mostly a defensive, ducking-and-weaving mode. It is good for sorting out a tough situation and coming out of it with honour, and even occasionally sente. In short, one is supposed to emerge with a palatable position from an unpromising base line. And very handy it is if you are having to invade a large framework. Frequently (one could say more often than not) this involves willingness to sacrifice. So a prerequisite is knowing one’s essential from one’s disposable stones.

Strategic knowledge is required for that, no good giving up key cutting stones, for example; but there is some psychology involved also. You have to see yourself as the kind of player who will give away some stones to trade up to a better overall position.

Sabaki is often muddled up with the concept of light shape, in other words achieving the handy kind of formation that the opponent can prune off a stone or two, but not punish severely. Making heavy shape is certainly not sabaki, because by definition it implies a continuing defensive burden. A heavy group is one that can neither be sacrificed nor quickly settled. So making light shape is a component thought in sabaki; it is, however, not quite the same concept. Sometimes sabaki gives one the extra satisfaction of making the opponent look short-changed in the result: there is an added ingredient of resourcefulness and dodging. We heard about this wondrous concept in some of the early books in English dealing with the middlegame.

Confusingly it has often been sold in the same packaging as the ’middlegame joseki’, a dodgy proposition (as it took me a while to realize). There are numerous standard sequences around corner enclosures, but the the main connection they have with the joseki concept is that they are much easier to learn than to apply properly in context.

This book is by Japanese star Yoda Norimoto, one of the strongest players of recent times. The chatty material in it is quite helpful. I agree with the closing words: ”Those who are strong at sabaki can be said to be genuine high dan players”. I used to obsess about sabaki over the board. If I produced one of the ’tricks’, it was quite marked that the 4 dans (huh?) and the 5 dans (that old move) looked at it differently. Regarding the moves and techniques simply as tools, they are at high level. Flick to the front of the book, and Yoda’s wisdom (please, I’ve heard the Star Wars jokes already) is also on display in the Introduction: the material is tough, but there are helpful remarks to be made about the fighting context.

That, by the way, is precisely why ’middlegame joseki’ is a fairly dud way of thinking: joseki are only good if they do fit the context. In the middlegame fighting, the context is the overwhelming and dominating factor. This is so to the extent that dropping a few points locally to notional ’best play’ is much better than getting a daft-looking outcome. This really does undermine the concept that you can know the correct sequence and unthinkingly drop it into position on the board.

In between the pep talks we get 78 full board problems. This book is a translation from a Japanese original. The usual Japanese teaching theory applies: the choice of problems is a balanced selection of various things, different aspects of sabaki with which it is good to be familiar.

I’m not sure that this theory of surveying material, and not trying to have the last word on any one technique, is well understood by us. Don’t expect a thorough reference work; I think that some serious students of the game can become stuck on the idea that thoroughness and system is the only way to write about it. I would say that I’m entirely familiar with the reasons why people want systematic discussions. The question is whether it is sensible to become an expert in one area of a topic, before having a basic feeling for the rest of it. Such unbalanced overall appreciation of what is going on has been a traditional weakness of European players.

In fact these days there is no reason not to aim at having the best of both worlds. If you like going closely over joseki-like, highly patterned sequences, I suggest study time with a good database of games. There you can observe the game contexts in which the pros choose their techniques, and that is the route to better perception, and ultimately strength. What the Yoda book offers is a good selection of fighting insights, particularly on direction. It is well worth having the text accompanying the answer diagrams, in this case.

The translation by Bob Terry will annoy some by its idiosyncracies.. ’Skillful finesse’ is our old friend the tesuji, and I’ll leave you to find where miai occurs in disguise, as it were with a false moustache on. There are rather too many diagram errors; I’ll be letting BGA book seller have an errata list.