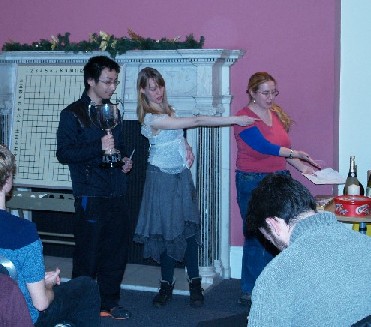 The 4d from Nottingham, Yuanbo Zhang, came out top of the list of 109 players at the 40th London Open. His only loss was in round 6 to Benjamin Drean-Guenaizia, 5d, from France. Benjamin had already lost in round 1 to Andre Stadtler, 3d Germany, but lost on SOS tie-break to Yuanbo. Pierre Paga, 4d France, won 5 games to come third on tie-break from the UK's Andrew Simons, 4d.

Also getting prizes were the Finnish winner and runner up in the Lightning: Mikko Siukola, 4d, and Janne Nikula, 1d.

Also held was the 1st WBaduk Varsity Match which Oxford and Cambridge tied 2-2.

Finally there was a Rengo competition before a New Year's eve meal.