The following details of the match have been announced today: 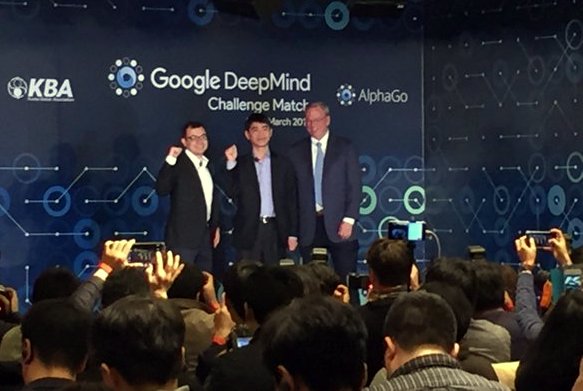 The matches will be held at the Four Seasons Hotel, Seoul, starting at 1pm local time (4am GMT) on the following days:

The games will be even (no handicap), with $1 million in prize money for the winner. If AlphaGo wins, the prize money will be donated to UNICEF, STEM and Go charities. The matches will be played under Chinese rules with a komi of 7.5 (the compensation points the player who goes second receives at the end of the match). Each player will receive two hours per match with three x 60­ seconds byoyomi. Each match is expected to take around 4­-5 hours.

The tournament will be livestreamed on DeepMind’s YouTube channel as well as broadcast on TV throughout Asia through Korea’s Baduk TV, as well as in China, Japan, and elsewhere. There will also be a daily summary, broadcast a while after the end of the game.

Demis Hassabis, CEO and co­founder, Google DeepMind, said: “Go is the most profound game that mankind has ever devised. The elegantly simple rules lead to beautiful complexity. Go is a game primarily about intuition and feel rather than brute calculation which is what makes it so hard for computers to play well. We are honoured and excited to be playing this challenge match against Lee Sedol, a true legend of the game, and whether we win or lose, we hope that the match will inspire new interest in Go from around the world.”

Quote from Park Chimoon, Vice Chairman, Korean Baduk Association (KBA) “The whole world is interested in this event as this is the first stage where humans and computers are competing in intelligence. I am proud that this historical stage is baduk (Go). I hope Lee Sedol 9 dan will win this time in order to prove humans’ remarkable intelligence and preserve the mysteries of baduk.”

Quote from Lee Sedol "This is the first time a computer has challenged a human pro to an even game, and I am privileged to be the one to play it. Regardless of the result, it will be a meaningful event in baduk (Go) history. I heard Google DeepMind's AI is surprisingly strong and getting stronger, but I am confident that I can win, at least this time."

Quotes from Go professionals and commentators ahead of the match:

Ke Jie 9p “ I used to think AI can never beat human, at least it won’t happen within 10 years. but this is unbelievable... I think Lee Sedol will win the match in March. I really want to play AlphaGo, not just me, all the active Chinese pros want to play it . ”

Gu Li 9p “ Without any doubt, this has been an astonishing development, I believe it will defeat human in the future.”

Chou Chun­hsun 9p “ I have always thought that Go should not be regarded as sport, but culture and art. Being defeated by the computer, we should probably return Go to where it belongs and bring it to another level. For example, the objective of learning Go is not only to win tournaments, but to explore the benefits and joy it gives us.”

Shi Yue 9p “ It will probably be a good opportunity for us when the program reaches the level of a top player and is accessible by the general public. I would definitely play with it every day using different tactics in order to understand more about Go. In fact, AlphaGo is a tool invented by people, and a tool has to be used for us to judge its advantages and drawbacks . ”

Rémi Coulom, Developer of Crazy Stone (a leading Go computer programme): [Commenting on how long it will be when a machine will win without a handicap] “I think maybe ten years,” he says. “But I do not like to make predictions.” “This is a really big result, it’s huge”

Li Ting 1p ­ Vice president of the European Go Federation “A lot of people will be shocked because for many years people have tried to sell the notion of Go as a game in which computers can never beat humans. As a promoter of Go, I think it is a good opportunity for more people to learn about this game, especially in Europe and America. Many people must have read about Go through recent news and are interested in it, furthermore, their interest may remain. We must discover more of the cultural and fun side of Go, so more people may appreciate the joy brought by Go. Our goal is to make Go the mind game that bewitches the world.”

Jeong Jaeseung(Professor of Bio and Brain Engineering at Korea Advanced Institute of Science and Technology) “The Lee Sedol­AlphaGo Match is not just about AI challenging human in a more complex game, Go, after beating human at chess. Unlike the past when AI calculated the probabilities and patterns for all moves, AI is challenging human with human­like reinforcement learning and strategy derived from deduction. The match, regardless of the result, will become a landmark in the history of AI.”

Changhyuk Yoo (Professional player 9D, Head Coach of Korean Baduk Team) “If AlphaGo’s current level is similar to the one it showed during the match with Fan Hui, Lee Sedol will easily beat AlphaGo. However, we are not sure how much progress AlphaGo has made during the six months after the Fan Hui match. I originally expected that it will take long to see AI catch up with humans in Go, but was surprised to see AlphaGo win in the match against Fan Hui.”

Changho Lee (Professional player 9D) "I heard about the match between Lee Sedol and Google DeepMind's AlphaGo through the media. I am surprised that an AI could challenge a human pro on even game. I believe Google DeepMind challenged Lee Sedol because they thought AlphaGo has chance of winning. It will be an interesting match, but I think Lee Sedol will win this time."

Dongyoon Kang (Professional player 9D, Winner of the 20 LG Cup) “I went through the game record of the match between AlphaGo and Fan Hui, and AlphaGo plays really well. It makes huge mistakes where standard procedures are necessary. I do not understand how computers can make such mistakes. There are some unnecessary steps. I think AlphaGo will ultimately lose after winning and losing some of the five matches. However, some people say that Lee Sedol earned USD 1 million prize money for free, but I do not agree. I would haved feared the result. Some say that AlphaGo’s true level was not revealed, as Fan Hui was not a very strong competitor, but I think AlphaGo showed enough how strong it is in Go during the match with Fan Hui.

Janghoon Kim (Korean Singer / Honorary Ambassador of KBA) “I think Lee Sedol will win this match. However, I believe some day, computers will beat human in Go. However, the important thing is to make people around the world interested in Go by connecting the analogue game of Go with IT, not who wins the match. It is a pleasure to have Lee Sedol of Korea play the leading role in the movement. I am curious about Lee Sedol’s thoughts about the match with the computer.”