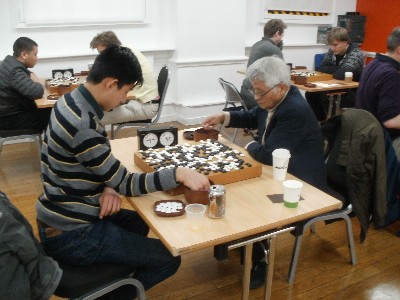 The 43rd London Open was held at its usual venue of ISH International Students House (ISH) in London. This year we had the kind support of Google DeepMind for the event, as well as the London clubs and BGA.

112 players took part in the Open, with others joining in the side events. There was a very strong top group with visiting and local Chinese players and some Korean players including Korean professional Hajin Lee, now known as Haylee Maas since her marriage.

Romanian professional Catalin Taranu gave lectures, analysed games too, and reviewed a game to the crowd assembled for the prize-giving (pictured).

On the second evening, the Pair Go Tournament was held, with 20 pairs taking part. The winners were the lowest graded pair at 10k: Gudrun Breitenbauch and Gerry Gavigan. They beat Yansai Noeysoongnoen and Andrew Simons into second place, by winning the final with a half-point margin. Here are the full Pair Go results and photo-gallery.

On the third evening, the Lightning Tournament was held, with 28 players playing in four groups. The group winners played knockout, with Chi-Min Oh (7d UK) beating Lucas Neirynck (4d BE) in one semi-final and Zoe Constans (15k FR) beating the previous winner, Sai Sun (5d CN), in the other. The final was played with no fewer than 21 handicaps stone, but Chi-Min Oh came out the winner by beating Zoe, who is actually his girlfriend! Oh previously won the lightning in 2014. 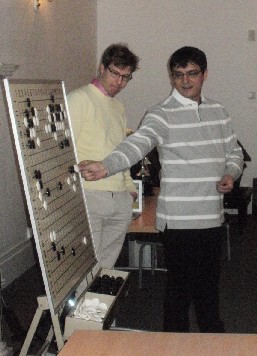 The Open ended up with two players on 6 wins out of seven at the top. They were declared joint winners: Seong-Jin Kim 7d, a Korean from Berlin, and Qiuchi Li 7d, from China now living in the UK. Equal third were Haylee Maas 7d CH and Qinmeng Zhang 6d UK. Fifth was Chi-Min Oh 7d UK.

After the prize-giving there was a casual Rengo tournament (won by Daniel Hu, Daniel Smith, Colin Lee and Alex Prachuablarb), an Italian restaurant trip and then more games until the small hours of the New Year.