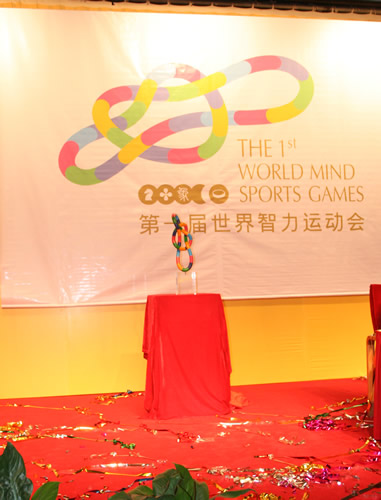 The first World Mind Sports Games was held in Beijing, China from 3rd to 18th October 2008. The event was instigated by the International Mind Sports Association (IMSA) and was organised by the Board and Card Games Administrative Center of the General Administration of Sport of China and the Beijing Municipal Bureau of Sport.

More than 2500 players from 150 countries and regions took part as well as more than 600 staff members (officials, coaches and referees). Five sports were involved - Go, Bridge, Chess, Chinese Chess and Draughts. There were 6 gold medals for Go: Mens and Womens Individual, Open Individual (no professionals allowed), Mens and Womens Teams and Pair Go.

The second World Mind Sports Games was provisionally planned for Manchester in August 2012, but was switched to Lille in France.

As far as we are aware there are no plans for any future such games.

In the past the GB team has been chosen from those volunteering who are BGA members and UK citizens, using the Ratings List in about April of the relevant year.