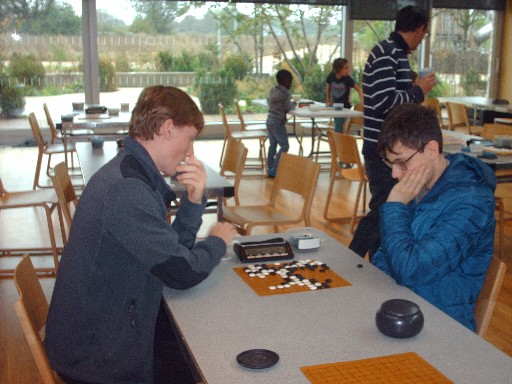 Twenty five years ago Paul Smith and some others started the Cambridge Junior Chess and Go Club. In order to celebrate their first quarter century it was decided to run an event that would be attractive to both children and adults. As the UK Go Challenge Finals were not held in the summer as normal, it was decided the event would be the finals for 2018-2019 (making deciding which age group players were in harder than normal). In order to make it interesting for adults it was decided to combine the event with the 2019 British Small Board Championship, as both events are played on 13x13. It was good to see that event back after a five year gap, though it was suspected it was brought back as Paul Smith was fed up of having the trophy for so long!

The venue was the modern lofty hall in Storey's Field Centre in the newly constructed district of Eddington, with a separate room for relaxing and eating some of the large variety and numbers of cakes kindly provided by Andrea Smith and others in the family.

Having both events on together worked well with juniors able to play some games against adults, with the top juniors having the chance of beating some of the top adults, if not the very best. As usual the Finals included team matches, age group titles, the main title positions and seven rounds in all. Games were, mostly against players of the same level, with draw masters Paul Smith and Tony Atkins managing to avoid assigning any handicap games for any of the 36 juniors. 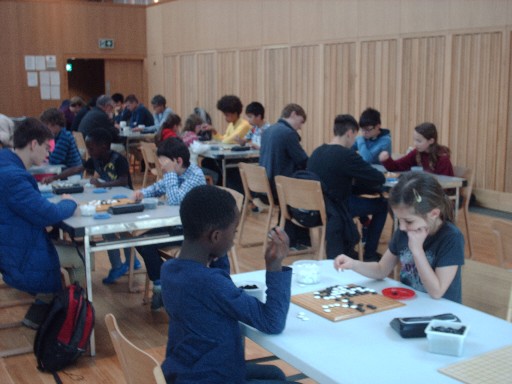 The top three winners and the challenger each got a large framed certificate showing their achievement and a cash prize and all age group winners received a certificate and a cash prize. All other junior players winning four or more also won a prize.