There are two common ways in which you can use a computer to play Go with other people over the Internet - real-time and correspondence. On a real-time server, both players are logged on at once, possibly playing under a strict time limit. With correspondence play, players do not need to be logged on at the same time, they simply send their move at their leisure.

By far the most common way to get a game of Go on the Internet is by using a real-time Go server. All the ones described here use English as the main language, but there are other servers in Japanese, Korean and Chinese. Here are some general notes for using all such servers.

The one we recommend for beginners is Go Quest. 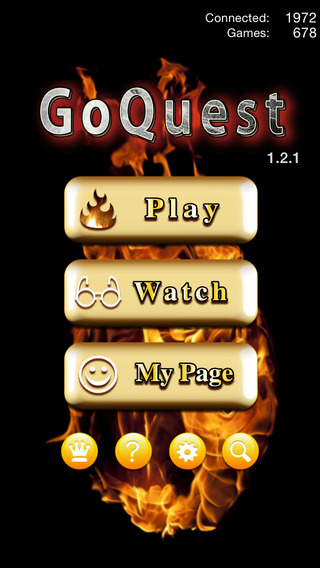 This is a new server that only supports 9x9 and 13x13 games, thus it is extremely suitable for beginners despite its limitations.

Like the other servers it counts the game for you, but only using Chinese counting, so it recommends that you fully capture all stones at the end of the game. The time limits are fixed - 3 minutes per game for 9x9 and 5 minutes for 13x13. If you want a handicap game you need to set this as one of your options and you may play against a bot if there aren't sufficient players waiting unless you set this option off.

Its ranking and grading systems are fun and it is quite addictive!

KGS (previously known as the Kiseido Go Server) has a client that is relatively easy to use. Please be aware that when using it you will get a Javanet safety warning message, so if this is a concern to you (it is for many schools) you'll need to use a different server.

A benefit of KGS is that it has a review facility, rarely found on other Go servers, allowing the players to discuss their game together afterwards. This makes KGS a good choice for beginners and for other people wanting comments from stronger players after games with them, or wanting to offer such comments.

KGS has a British room and has hosted British Go Association on-line tournaments. It is also often used to relay the moves of British Championship title match games, with commentary by professional or strong amateur Go players.

To use KGS, you can simply point your browser to the KGS Server. This will download a java applet to your computer to serve as a client. But in order to avoid this being downloaded every time you connect, you can instead download the Cgoban3 client to your computer and install it there. It uses Java Web Start (which is also available from there). You can also use the client to edit locally held game records that are in SGF format.

Note: since there's only a Java client you can't access KGS from an iOS computer such as an iPhone, iPod or iPad.

However from May 2020 a new web interface is being introduced called Shin KGS.

Pandanet (originally and sometimes called IGS) is probably the oldest Go server, and one of the most popular. It has a global membership and players of all strengths and abilities. Many professional players are members, so you may get to see professionals at play. Pandanet often transmits live the moves from professional title matches and interesting amateur events such as games from Pandanet Go European Cup tournaments, the European Pair Go Championship and all the matches, except the finals, from the Pandanet European Go Team Championship.

In addition to playing Pandanet offers a paid-for subscription service whereby subscribers receive emails of a number of amateur game records per month, commented by professionals. (See the this recent description.)

From an iPhone, iPod and iPad or Android device download the Panda Tetsuki app. The remainder of this section is not relevant if you do this.

To use Pandanet on other computers, you will need a client program running on your computer to display the board and send and receive moves between your computer and the server. Download one such as their recommended GoPanda2 which uses Java Webstart.

See the page Playing on Pandanet for more details.

One nice facility is the demo option which gives teachers the ability to create instant problems (and which can be saved into word processing documents).

It also provides a series of Tournaments and Ladders as well as a Group facility, so that you can create your own club or teaching area.

This information assumes that someone has already set up a room ("Group") on OGS for Your Club.

Signing up -- once only: Go to the Online Go Server

Enter a name -- needs to be unique on the OGS Site and Password.

Optional email: you will need this to use "chat" -- STRONGLY RECOMMENDED.

Will you get an email sent to you, for you to authorise/validate

Click on "Home" at top left, at right of page click on "Groups", In Search box, at top right, type "Your Club".

Communication with other people in the room:

For most people, you can communicate by using the (limited) "chat" facility in the Club's OGS room, so it is best to have this in a second tab or window whilst playing.

There is also a private one to one chat facility.

Thanks to Harry Fearnley, Charlie Harvey, and Brian Zhang for this information.

This server is still under development; it has been financed jointly by us and the American Go Foundation (the charitable arm of the AGA).

It is aimed at children aged 7 - 13, and has been designed to provide a guaranteed safe environment for children.

It has three modes of operation:

New servers are often being developed, such as Color Go Server, new for 2021, that shows influence with coloured shading for beginners.

Many other servers, including the general games servers that include Go, are listed in the American Go Association's Go Server list or Sensei's Library listing of Go Servers.

If you use a Korean language server, you may find the Guide to Hangul useful.

We no longer maintain listings of all Go clients, but our iPad, iPhone and iPod Touch apps and Android apps pages may help for these devices. Also, you may find the listing of Pandanet clients on Jan van der Steen's gobase.org web site helpful.

Pandabridge offers an alternative to the Pandanet client program download. With Pandabridge you can observe and play Pandanet games directly in your browser window. All up-to-date browser types are supported. Even the "Internet Channel" browser for the Wii is supported, allowing you to view games of Go on your television. A Pandanet login account is required for access to Pandabridge.

Instead of playing in real time, it is also possible to play correspondence games where you wait until your opponent makes a move in his or her own time. This is a less common way to play Go on the Internet.

There are a number of servers that store the current state of the game for you, allowing you to log on at will and make a move. A list of these is Sensei's Library listing of turn-based Go servers. Among the servers in these listings, about 130 British players play on the Dragon Go Server, and the newer Online Go Server (OGS) is also very popular and can also be used for real-time games. A recent addition is International Network Go Organisation. The Free Internet Correspondence Games Server (FICGS) also features Go.

The American Go Association maintains a list of people interested in playing Go via email. They range from total beginners to amateur 4-dans. Some play at a rate of several moves per day and some at one move per week. Some only want to play 19x19, while others might not have time for more than 13x13 or 9x9. If you are interested in playing Go via email and making contact with people who share your interest, contact the maintainer of this list: jjw6@psu.edu. Your name will be added to the list. You will receive a copy of an updated contact list for your use. You should specify your:

For other ways to use the Internet to find out about Go, see here.