A Brief History of Go

Go is one of the oldest board games in the world. Its true origins are unknown, though it almost certainly originated in China some 3,000-4,000 years ago. In the absence of facts about the origin of the game there are various myths: for example that the legendary Emperor Yao invented Go to enlighten his son, Dan Zhu.

Although it originated in central Asia and there are references to the game by Confucius, historically it was in Japan that the game really flourished. Introduced into Japan probably well before the 8th century, Go soon gained popularity at the Imperial Court and, from this auspicious beginning, took root in Japanese culture.

In 1612 the Shogun awarded stipends to the four strongest Go players. Later these stipends were extended to the players' heirs and so the four great Go schools, Honinbo, Hayashi, Inoue and Yasue, were founded. Over the next 250 years, the intense rivalry among these schools brought about a great improvement in the standard of play. A ranking system was set up, classifying professional players into nine grades or dans, of which the highest was Meijin, meaning 'expert'. This title could be held by only one person at a time, and was awarded only if one player out-classed all his contemporaries.

The most significant advances in Go theory were made in the 1670's by the Meijin Dosaku, who was the fourth head of the Honinbo School, and possibly the greatest Go player in history. The House of Honinbo was by far the most successful of the four Go Schools, producing more Meijins than the other three schools put together.

The whole structure of professional Go in Japan was undermined in 1868, when the Shogunate collapsed and the Emperor was restored to power. The Go colleges lost their funding as the westernisation of Japanese society took hold. On his retirement in 1938, Honinbo Shusai ceded his title to the Nihon Kiin (the main organisation of professional Go players in Japan), to be awarded in an annual tournament among all leading players. Since then other major contests have been introduced, the most important being the Meijin and Kisei tournaments. There has recently been a big increase in the popularity of Go in Japan, particularly among the young, due to a very successful cartoon called Hikaru no Go. There are about 10 million Go players in Japan, some 500 of whom are professional.

Today, the Nihon Kiin increasingly fosters interest in the game throughout the world. There are magazines and over 100 books in print in English and over 60 countries compete in the annual World Amateur Go Championship.

Go elsewhere in the Far East

The most important Go playing countries in the Far East are Japan, China, Korea and Taiwan, all of which maintain communities of professional players. Major tournaments in these countries attract sponsorship from large companies, and have a following like that of big sporting events here. Until relatively recently, the strongest players from Korea and China tended to go to Japan as professionals. Today, they are more likely to remain in their own countries where they become national heroes. There are perhaps 50 million Go players in the Far East, and many people who don't play still follow the game with keen interest.

In its original homeland, Go is known as Wei Qi, which means 'surrounding game'. Known by the time of Confucius (around 500 BC) it had already become one of the "Four Accomplishments" that must be mastered by Chinese gentlemen.

Subsequently it developed more slowly than in Japan, and during the Cultural Revolution the game suffered through being regarded as an intellectual pursuit.

Since then, following the establishment of the professional system in 1978, the Chinese players have caught up with the Japanese once more. Wei Qi is now taught in many schools, and tournaments are held throughout the country. There is also the annual match between China and Japan which is followed with great interest. With the opening up of China, Chinese professionals are now frequent visitors at European Go tournaments.

The long rich history is well-covered in John Fairbairn's Go in Ancient China.

Here Go is known as Baduk and is very popular. Koreans have a reputation for playing very fast. Fast or not, they are producing some of the world's strongest players.

Their professional system was set up in the 1950s when Cho Nam-chul returned from professional training in Japan. Today Baduk is more popular in Korea than anywhere else in the world. It is estimated that from 5 to 10 percent of the population plays regularly.

As in Japan, there are many newspaper-sponsored tournaments with a large and devoted following. In recent years, some of the top Korean players have scored impressive victories in international competition. Today there is little doubt that some of the world's strongest players live and play in Korea.

China and Korea both have growing populations of very strong young players, a phenomenon which bodes well for the future development of the game.

Although the game of Go had been described by western travellers to the Far East in the 17th century, it was not played in Europe until 1880, when a German, Oskar Korschelt, wrote a book about the game. After this some Go was played in Germany and Yugoslavia. However, the game was slow to spread and it was not until 1957 that the first regular European Championship was held.

Nowadays, Go is played in most European countries. The standard of play is significantly below that of the top players in the Far East, but the gap is steadily closing as more of the top European players spend time studying the game in Japan, Korea and China. Some even stay on as professionals. In 1992, a European Go Centre was opened in Amsterdam with support from Iwamoto Kaoru (then the world's oldest active professional at 90 years of age).

Go has been played in Britain for at least 100 years, but was not played on an organised basis until the 1950s when the British Go Association was formed. Today, Go players are numbered in thousands. There are about 100 Go clubs throughout Britain, and the standard of play compares with the rest of Europe. Matthew Macfadyen, Britain's top player in recent years, has won the European Championship four times.

A British Championship and a British Youth Championship are held every year, and there are Go tournaments throughout the country. These often attract upwards of a hundred players, including many beginners and young players. An open British Go Congress has been held at a different venue each year since 1968, and the London Open is one of the major events in the Europe-wide Toyota-Pandanet Tour.

As recently as 20 years ago, formal games between Go masters from different countries were practically unheard of. The last 10 years have seen a historic proliferation of international championships, where the great players from Japan, China, Korea and elsewhere compete to be seen as the world's best player. Annual events include the Fujitsu Cup and the Dongyang Securities Cup.

The BGA sends British representatives to these events.

Go on the Internet

In recent years, the Internet has become a valuable resource for Go players, not only as a place for playing Go, but also as a place for teaching, learning and discussion. An enormous number of people of all strengths and nationalities play online, via Go Servers such as KGS. KGS includes a number of “rooms” for both playing and discussing Go, including the British Room, an online community of British Go players. The BGA regularly holds tournaments on KGS, including an annual student tournament and an interclub league.

There are also “turn-based” or “correspondence” Go servers, such as the OnlineGo Server. These allow games to be played over a longer period, for example a few turns per day, or even a turn every few days.

Also, many players, including professionals, play on the Pandanet server. 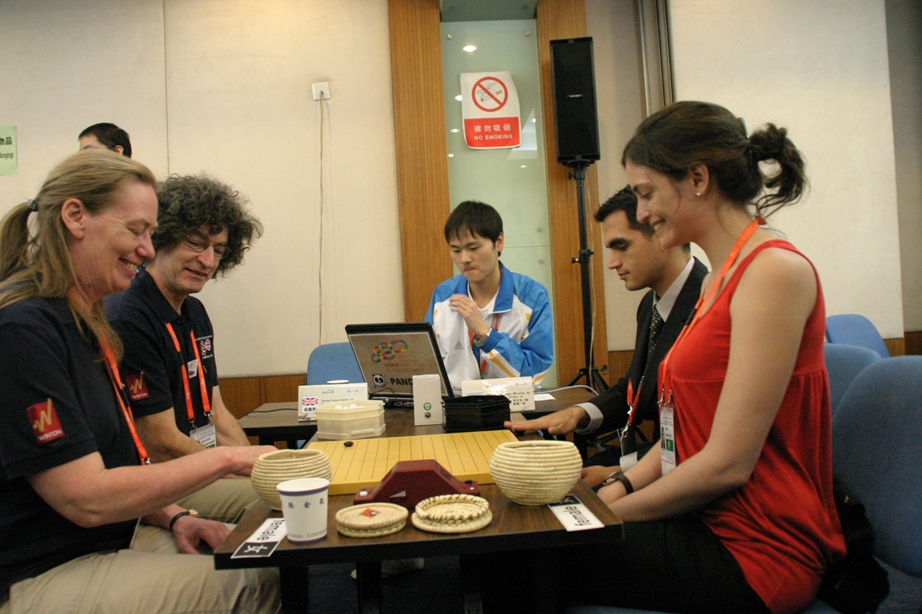 Pair Go is a form of Go played by teams of two, a male and a female, with no conferring. It is the "Mixed Doubles" of Go. It was introduced in Japan in the 1980s with the aim of promoting Go as a more social activity and attracting more female players to tournaments.

Pair Go envolves a special etiquette which involves avoiding bad manners and attitude. The environment for Pair Go events is pleasant and a higher than usual standard, as is the standard of dress. In order to encourage this, a Best Dressed prize is traditionally awarded at all Pair Go events.

The first International Amateur Pair Go Championship was held in 1990. In Britain, there is an annual British Pair Go Championships, which has been held since 1991. A Pair Go side event also takes place at the London Open. Additionally, Pair Go is often played less formally at other tournaments and clubs.

NEXT PAGE: How to Play 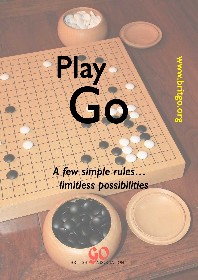 This page is part of the online version of our Play Go Leaflet.

Book: An Introduction to Go